“Black hair does grow, if you look after it your hair can grow.” – Kiyanna Azonwu

Said to a sceptical Lilly with a horrible Mohawk at a wedding across the globe.

So you want to know the deep reason behind why I went natural? The cold hard truth? Brace yourselves. Honestly… I just wanted to see what else my hair could do. That’s it.  Really. See by the time I went natural I had pretty much done and tried everything with my hair. So the story goes that between my big sister and me, she got the better genes when it comes to hair. Hers grows faster, thicker and longer. We would cut our hair at the same time, braid it, relax it, and put hair food on our scalps every solar eclipse. But, by the end of the relaxing process, as I waved the smoke/steam from the blow-dryers away from my face, she would have a full head of hair while I would be trailing behind with sad floating strands.

One of the places we went to relax our hair was this Nigerian salon in Yeoville. Now unless you reached the point where you practically begged the guy doing your hair to wash it out, unless those puffs of smoke (or the soul of your hair perhaps) came up as he blow dried it (with thaaaat hair dryer), unless you looked like a wet black cat by the time you left the salon – your hair wasn’t relaxed. That and the gross scabs that formed over the burns that I would scratch off while at my desk in school. But there I would be, every 6 weeks looking like a wet black cat with my hair in a ponytail that resembled a lays potato chip.

I genuinely can’t remember when I first relaxed my hair. It was just always there and that’s what my mom prescribed for us and for herself. I have never really asked her why but I think it’s simply – that’s what was done. She tells stories of how when she was a girl they would use hot combs to get their hair straight and would be disappointed when it kinked up again due to getting wet. So I guess relaxers was a much needed more permanent solution. Relaxed hair was easy to maintain and easier to put rollers in for church on Sunday when we would walk around looking like James Brown. (Kidding, it wasn’t that bad mom) but that’s just what we did.

Anyway back to my sister, she always had the better hair so at some point I gave up on mine. I didn’t care and in a way it freed me to experiment a lot. I briefly had an afro which I didn’t know how to maintain so it broke off due to excessive blow-drying. In university I discovered the weave and it was weave city in Lilly-ville with me walking around looking like I had a helmet on. Later on I had a pixie cut, and dyed it blonde. In between that, I had a blonde “Rihanna” fringe weave which I used for my album cover (which I regret to this day – suuuuuch regret). I continued with my pixie cut but eventually it broke off cause of the constant bleaching.

Eventually I got sick of it all and frustrated with my complaining, Blaque suggested I just cut it all off. Which I did.

I quite liked the brush cut, the freedom and boldness of being pretty much bald. It also helped to embrace my beauty and features. Check out a full blog on that here. I liked it so much I even got married in it, to many protests from my amazing mother. The only thing that sucked about the brush cut was I couldn’t just get up, put on sweat pants and a t-shirt to go buy milk without looking like a boy. Cue the gigantic earrings to compensate yaaay!

Anyway Eventually I slightly grew it out and I had a German cut which I rocked for a while. I liked it though I felt it was not feminine enough at the time. On the eve of a trip to the USA I hadn’t gotten it trimmed and my husband convinced me he could do it in our dimly lit cottage. Such Lies!!!! The result was me having a full on scary Mohawk. I was so upset and it was during this Mohawk time that everything changed.

The Revolution happened at a wedding

So I was in the USA attending and performing at Janette…ikz wedding in 2014 and there I met Ezekiel Azonwu’s beautiful wife Kiyanna with her even more gorgeous hair. We spoke briefly and I can’t remember how we got onto the topic of hair (perhaps I expressed my envy) and she said “Black hair does grow, if you look after it your hair can grow. I have worked with women with hair just like yours and it grows” I left the USA with my mind shifted. I had never heard this. In all my days of being born and living on African soil I had never heard this. It took me going on a trip across the world to a country whose black population is minute compared to my own, to learn this. My mind was flipped. I came home and googled every possible thing I could on natural hair.

Now my husband will tell you, once I get an idea or something I want to try I will obsess over it and I will research the heck out of it till I know all there is to know. And that’s exactly what I did. I read blogs and article and enrolled myself in the University of Youtube Tutorials of which I am an honours student. I tried to get as much information as I could. Unfortunately all the tutorials were American so finding products was hard but I worked with what I had. So for about a year of a lot of trial and error and learning magical words like “shea butter” and “shrinkage” I finally figured out this hair on my head and guess what? It actually grew guys! It grew. I couldn’t believe it when my own mother, who birthed me, looked at me in shock at how big my afro had progressed. She didn’t even know I could grow that much hair. And I confidently could say, our hair “does grow”.

Before I make your eyes too tired..
Check out part 2 and 3 in the links below:

*6 things I wish I knew before going natural 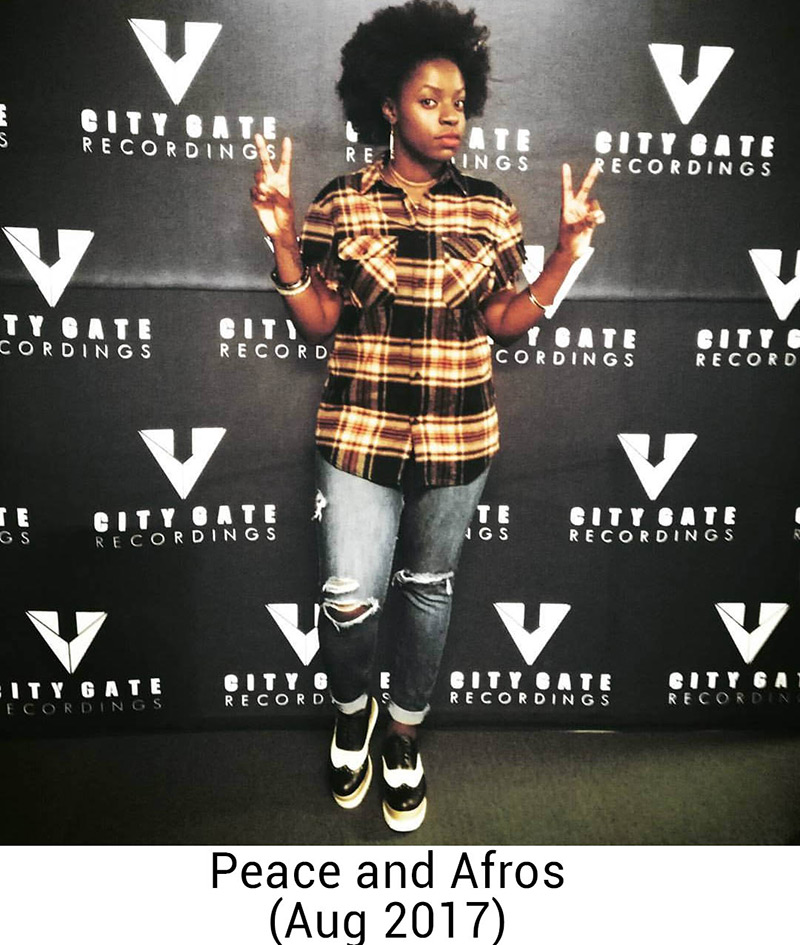